I have been to so many amazing locations around the world. Among the most memorable is, hands down, my trip to the Canary Islands a few years ago.

The stunning volcanic archipelago located off the coast of north-western African, more affectionately known as the Canary Islands is a land endowed with great ecological diversity, balmy climates, treasured black and white sand beaches; and simply blesses the eyes which are graced to appreciate the magnitude of its beauty. 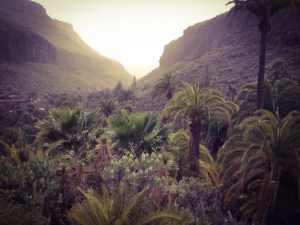 The Canary Islands is a conglomerate of seven main islands, in addition to six islands and islets surrounding the archipelago. Each of these astonishing pieces of land, although close in location; has somehow managed to develop substantial differences in their ecological diversity, thus causing every plot of land to form a unique part of what is known as the Canary Islands. In light of this, we will now proceed to explore three of the hidden getaways in all their glory.

First to be considered are the sand dunes of Maspalomas, which has been dubbed as a tourist town located south of the island Gran Canaria. Generally, to come into contact with any sand dune, one might consider that it would include riding on a camel’s back from some underdeveloped area, and taking hour- long journeys out into barren lands. However, to the surprise of many, Maspalomas is the complete opposite. This beautiful area not only boasts astonishing sand dunes which evokes the inner child, but the remaining spread of land is colourfully decorated with exotic resorts and amenities of international standard. These resources include: hospitals, international schools, shopping malls; among other infrastructure which you would most definitely be able to find at home, which are a rarity in tourist destinations. The dunes are often visited by those who are at one with nature and prefer to go without clothing while traversing the land and connecting with the essence therein. Additionally, these banks of sand are also the abode to many species of rare plants, lizards and rabbits; which somehow manage to survive the arid climate.

Another site to behold, most definitely not for the faint at heat is Mount Tiede, an active volcano located on the island of Tenerife in the Canary Islands. This is no typical volcano as its summit is the highest point in all of Spain, and is also the highest point above sea level located in all of the islands located in the Atlantic. Coming in at a jaw-dropping 24,600 ft measuring from its base on the ocean floor, it is the third highest volcano on a volcanic island in the world, following up behind both the Mauna Kea and Manua Loa in Hawaii. Surrounding this active volcano is the Teide National Park which is a UNESCO certified World Heritage Site and one of the most visited national parks in the entire world.

For the prospective astronomer or the enthusiastic tourist who loves to stargaze, nestled in slopes of the mountains is an astronomical observatory on the island of La Palma. This little rock of land is home to one of the largest collection of astronomical telescopes in the entire world, and is home to the world’s largest telescope, Gran Telescopio Canarias, measuring in at a whopping 10.4 m. A real must-do if you visit La Palma.

There is year-round sunshine on these beautiful islands, so the days are pretty much perfect for whatever you want. If you are reading from mylenebesancon.com/myblog and would like to participate, click on the title and share a comment.

I had a whale of a time on this stunning volcanic archipelago. The Canary Islands most definitely boast amazing wonders of nature that connect with mind, body and soul.

‘Mylène’s Blog’ gives you an answer to something you’ve been curious about. ⑇ Are you a songwriter or have friends who are? I co-founded Tunedly, a selective music publishing and recording studio. ⑇ The Homepage of my website is the best place to learn about me. Homepage LinkedIn Twitter Facebook Instagram Gallery ⑇

This site uses Akismet to reduce spam. Learn how your comment data is processed.